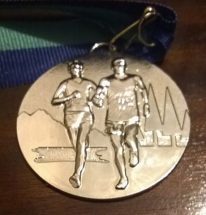 Mallusk Cross Country
:
So cold blows the chill of winter wind. The trees that branches bare
The slightest blink of the season sun, its rays once more so rare.
And so again they gathered, with the threat of snow they dared.
In the footsteps of Olympians they hope to be compared.

Each athlete knows the history, of this celebrated course,
and stand they might together as if a signal to endorse.
For Mallusk is once more famous as it was in years gone by.
When those famous old Olympians brought a tear to each one’s eye.

And so, at day’s end when every race is ran.
We toast our fellow athletes, including,
Radcliffe, Ovett and Cram..

(Dedicated to Race Director Mr. Paul Skillen and his troops).

A very busy weekend for Mallusk Harriers including the running of the club’s inaugural cross country race at the City of Belfast playing fields at Mallusk. A superb day for the club with race director Paul Skillen and his army of volunteers including the catering & registration guys who made this race a huge success. A big thankyou to Belfast City Council for the use of the pitches, Ian Simpson and Imagis for the race numbers and St Johns Ambulance.

Many Harriers took part in parkruns and other races across the weekend and the results now follow.

Darren Linton was our solitary Harrier at Victoria Park in 28:55.

Duncan Baxter, with memories of Disney fresh in his mind, decided to visit another world of fantasia, finishing at Stormont in 28:49.

Young Robbie Gould switched the boxing ring for a ring of the Waterworks crossing the line for Mallusk in 23:10. Patrick Hamil arrived next in 26:13, with Joanne Haddock 42:03 and Anna Marie Nolan 42:29.

Under snow laden skies and a cold brisk easterly wind, the City of Belfast Playing Fields at Mallusk, was the setting for Mallusk Harriers inaugural cross country event. This fabulous event has once more returned to the race circuit calendar having remained dormant for the last couple of decades.

Starting at 11am with the under 11s, it continued through to the senior men’s at 3.15pm.

The Under 11 boys & girls were the first group of athletes to officially open the 2017 Mallusk Cross Country. Christopher Campbell continued on from his parkrun PB on Saturday to finish impressively for the young Mallusk Harriers in 2:42, with Ryan Millar hot on his tail in 2:46, and Ryan McCready breathing down his neck in 2:47. Leo McAuley arrived in fine form in 3:43, William O’Hare coped well in the conditions in 3:58 and Harry Dinsmore arrived home hardly out of breath in 4:16.

Ellen Butler showed she was capable in the worsening conditions arriving as 1st Mallusk Harrier in 3:01. Sophie Davidson was not far behind in 3:10. Mali Skillen made her parents proud in 3:30, and Erin Teer skipped home in 3:40, with Eloise McAuley finding top gear in the final straight arriving home in 5:00.

1st Mallusk Harrier Adam McCann tackled a battering wind arriving in 6:54. Jack McCready was closing the gap in 7:09 and Ben Davidson completed the 1 , 2, 3, for Mallusk impressively in 7:50.

Two Olivia’s shone for Mallusk in the U15 girls race with a amazing time from Olivia Thompson 15:18, ahead of Olivia Morrow who found a little extra towards the finish in 16:31.

Mallusk’s Chloe Davidson arrived 2nd and showed what she was made of as the ground conditions deteriorated with a great time of 18:57.

Once again the Young Mallusk Harriers show the rest of us how tough they are when weather conditions turn against them….
Well done to them all.

In the ladies 3 mile race, Susan Thompson for Mallusk showed once again how she can cope in the worst of weather finishing 3rd in 23:04. Nuala Muldoon impressive as always arrived next in 23:27. Mairead O’Hare was not afraid to tackle the steep incline and the challenging course coming home in 42:02. A special congratulations to Beechmount Harriers Catherine Diver who won the ladies race in 19:46, with City of Derry Spartans Catherine Hriber 2nd in 22:42.

The wind had dropped slightly for the men in the 4 mile race, but conditions under foot remained heavy. The 1,2,3, belonged to North Belfast Harriers, with Martin McKinstry blitzing home in 22:42. Olympian Michael McKillop 2nd in 23:09 and Edward Cooke completing the podium in 24:28. First for Mallusk Harriers was Patrick McGuickan 28:02, with Alan Kerr arriving in 35:04. Neil McGlinchey 39:05 and Duncan Baxter 41:24.

Today though, wasn’t really about the times. It was all about competing in the event and the conditions that made the race challenging, with an interesting two lap switch back course and more importantly putting Mallusk Cross Country back on the map.

Not for the faint hearted this half marathon which straddles the border, has a pleasant start on the side of the quay in Newry before climbing into the hills with a spectacular views of Carlingford Lough and South Armagh, before the descent into Dundalk. Danny Donaldson of Mallusk, suffering a little jetlag from his week in the United States, still finished in an impressive 1.36:21. Matthew Cromie came a couple of minutes behind in 1.38:42. Matthew Allen 1.42:02. David Mullan 2.00:49, and seconds later Cat Boyd & Anna Marie Nolan as a sound double act in 2.00:55. Another jetlagged US Globe trotter Tiffany Donaldson 2.29:32 and Kelly Carlisle 2.30:05.

That completes (I hope) another excellent weekend for this fantastic running club. Mallusk Harriers right to the line and blasting through it….