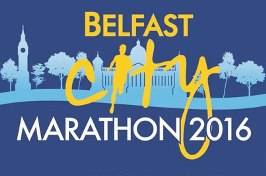 It wasn’t exactly Cheltenham races on Bank Holiday Monday in Belfast, neither colts nor fillies in sight (there was plenty of other fancy dress out there), but the Mallusk Harriers ladies certainly had their hats on and took top honours with some absolutely smashing times at the 35th Belfast City Marathon; the lads also put in some quality times over the 26.2miles of the course, with Patsy ‘Batman’ Hamill or now known as ‘Batsy’ completing the course in full Batman outfit in 3hrs 30mins . Amongst the 25 members running the full marathon, there were also several relay teams running for Action on Hearing Loss and Meningitis Now, NI Hospice, Mencap and PIPS all extremely worthy charities. In addition to this I am very sure I am going to miss out on other club members who completed the relay for work or other charities, if by chance I do miss you out in this report I am sorry…!

First to enter Ormeau Park after completing the full 26.2miles for the Harriers was Danny Donaldson. Young Danny has been in fine form already capturing the club records for many distances from 5k up to Half Marathon. This being Danny’s first Marathon he certainly didn’t hold back and completed in fine fettle with a smashing time of 3hrs 13 mins, and now adds the club marathon time to his collection. Next to cross the line was Neil Campbell; Neil also notched himself up a PB in a great time of 3hrs 24mins. Neil was very closely followed home by Alan Ladd. Alan completed last year’s marathon after having to receive medical attention and had to take some time out before finishing the run. However no such episodes this year, Alan put in some great training this year and knocked 30+ mins off his time returning in 3hrs 25mins smashing running Alan!

Yep indeed – the first three past the post have been gents and I did say ladies took top honours… our fourth runner home claimed good for age for either London, New York, Boston or even Berlin. Entering her very first marathon Susan Thompson had an absolutely cracking race and first marathon and returned 3hrs 42mins, all at the club are extremely well proud for you Susan.
Back to the lads. Michael McAuley came across next in a time of 3hrs 50mins knocking 40mins off his previous years time claiming himself a new PB. The next lad to come home had a somewhat unplanned end to his marathon. Ciaran Skillen had been going great guns up until the 23 and half mile mark, many would say oops the dreaded wall, although this wasn’t to be as Ciaran had pushed himself to the limits and beyond and told me the minute he came off the Ormeau tow path he could not remember a single thing until crossing the line. Ciaran managed to get to the finish line and cross in a smashing time of 3hrs 54mins, however collapsed and had to seek medical attention. Thankfully St Johns medical staff were quick to react and got Ciaran off to hospital where he was later diagnosed with Rhabdomyolysis or in lay man’s terms his muscles had broken down and released nasty toxins into his blood which attacked his kidneys. I have been inundated with many well wishes from all at the club, family and friends from other running clubs wishing him a full and speedy recovery.

Next up was Brian McDonald completing his second marathon in as many weeks; Brian returned in a great time of 4hrs 3mins. Then there were more ladies. Notching up a PB was Elaine Kennedy with a time of 4hrs 8mins. Next home was Catherine Boyd also with a new personal best in 4hrs 10mins, Nuala Muldoon came across the line next in 4hrs 12mins completing the run for Action on Hearing Loss. The ladies had been followed home by two gents Martin McCready and Alan Kerr in 4hrs 14mins, the lads were closely followed by Louise Bond in 4hrs 16mins. The next runner over the line and running in his first marathon was the very youthful Noel Bloomfield with a great time of 4hrs 17mins (was that Dublin I hear your say?). Janet Grew was next over the line, 4 weeks prior Janet completed the Paris marathon for Meningitis Now. Again running Belfast Marathon for the charity, Janet grabbed herself a new PB in 4hrs 17mins a fantastic achievement for a very worthy beneficiary, it doesn’t stop there as she is geared up to tackle the Walled marathon.

Running his first marathon Darren Taggart with his cheese strings, oops sorry hamstrings playing havoc with 10 miles to go, he still returned in a great time 4hrs 19mins. After completing the Belfast marathon 28 years previously and said no chance would he ever do another, Mr Tom Wylie collected his aches and pains around 17 miles and returned to the finish in 4hrs 25mins. More ladies, Siobhan Dempsey running her first marathon had the opposite shouts of joy to that of Tom and many others and wanted to run the race again the very next day. Siobhan returned in a great time of 4hrs 36mins. Dave Gibson like many other gents in the club that day with dodgy knees came home in 4hrs 41mins and still managed a 5min PB, great stuff Dave.
The next two ladies over the line were Jolene O’Donnell, with a new PB, running under the banner of Mencap and Jessica Wilson under NI Children’s Hospice, in her first marathon, both ladies returned in 4hrs 48mins, great running girls and very well done.

If you think Darren Taggart’s hamstrings were bad, the word on the street is that Paul Skillen is still scouring the Whitewell Road for his knees with both his ITB giving way around mile 15, but sure in his own stupidity he shuffled and jogged to the finish accompanied by his oldest lad who was only meant to run the Antrim road leg of the relay for the PIPS charity and now wants to complete a full marathon, see the madness doesn’t fall far from the tree. The next three runners home completed the course stride for stride, Duncan Baxter, Kelly Nelson and Tiffany McAllister. A great testament to Duncan who had stuck with Kelly throughout her training and never once complained but took on the challenge and got right to the line, further to this Tiffany managed the majority of the training on her own, an extremely difficult task, it can become very easy to throw the towel in especially as this was the girls first marathon, but not a chance all three made home in 5hrs 51mins absolutely smashing stuff folks.

The club also had notable runners in relay teams in the marathon; first set home was the two ladies Deborah Ewing running the first three legs and Tina Steele running the next two legs in a great time of 4hrs 5mins. There was also the relay team of ‘The Illegal Eagles’ made up of Dean Finlay completing the first two legs, Leeanne Skillen the Antrim Road leg and Gillian Bainbridge completing the final two legs, with the team returning in 4hrs 25mins. The next relay team Barry’s Belles, made up of Joanne Haddock, Anna Marie Barrington, Karen Marsden and Ian Simpson came home in 4hrs 55mins.

A special mention to two other members running for Meningitis Now, Jim Grew and Benny McGeown, the lads were part of Team Snickers and completed in 3hrs 31mins, well done lads. Also a big shout out to our famous Jenny Butler who ran the London Marathon a week previously ran the first leg of the marathon for Action on Hearing Loss, well done Jen.

Phew… I am sure I missed out someone, sorry…
Again apologies if any of our runners have been missed out in this week’s report, as I am sure someone may have been overlooked…
Safe running to you all, ‘pay it forward…’ and remember ‘Right to the Line…’