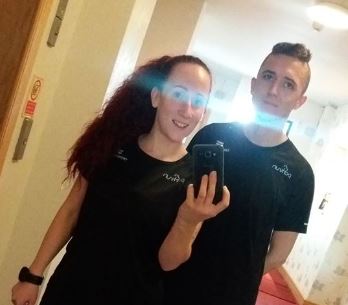 “The lesson of running is to train well, and then have full faith in your training and show the proof in the race”.

You may think these fine words were spoken by me after my long run this morning (highly unlikely as I was unable to communicate at that point) or more philosophising from Danny, but no.

These are the words of Eliud Kipchoge after breaking the world record by 1 min 18 secs in Berlin this morning. Time of 2:01:39. Average pace about 4:38 per mile. No words.

And let it not go unnoticed that Gladys Cherono won her third Berlin, broke the course record and also PB’d in a time of 2:18:11

On Friday, Micky McAuley continued his quest for promotion within the headers department by taking part in the Salomon Ben Nevis Ultra. Just 52km and 4,000ft of elevation. (No Lee, no). Micky came 146th out of an elite field of almost 300 in a time of 6:18:15. Promotion highly likely Micky.

Same day, Neil McCready and Paul Skillen covered 2 elements of the GOAT Triathlon relay on Saturday in the Glens of Antrim in a time of 1:38:47.

Then this morning, our vest in the west found yet another race to enter in Tyrone, completing the Dungannon Little Running Club 5k in 24:39 (unofficial).

Also today, Neil McCready decided running cross country was too easy (?!) and so competed in the Ulster Cyclo-Cross event in Lurgan. Basically XC on a bike! He completed the 8.4 mile course in 48:20 (unofficial).

This week’s tourists were Mr and Mrs Donaldson who visited City of Derry parkrun finishing in 18:29PB and 31:12PB respectively with a 2nd place finish for Danny. He had no words of wisdom.And Joanne Milne avoided having to answer for the cake no show by going to Orangefield 26:49PB.

Given the amazing performances in Berlin today (and all the long runs being completed at the minute) there’s only one song I can really use this week.