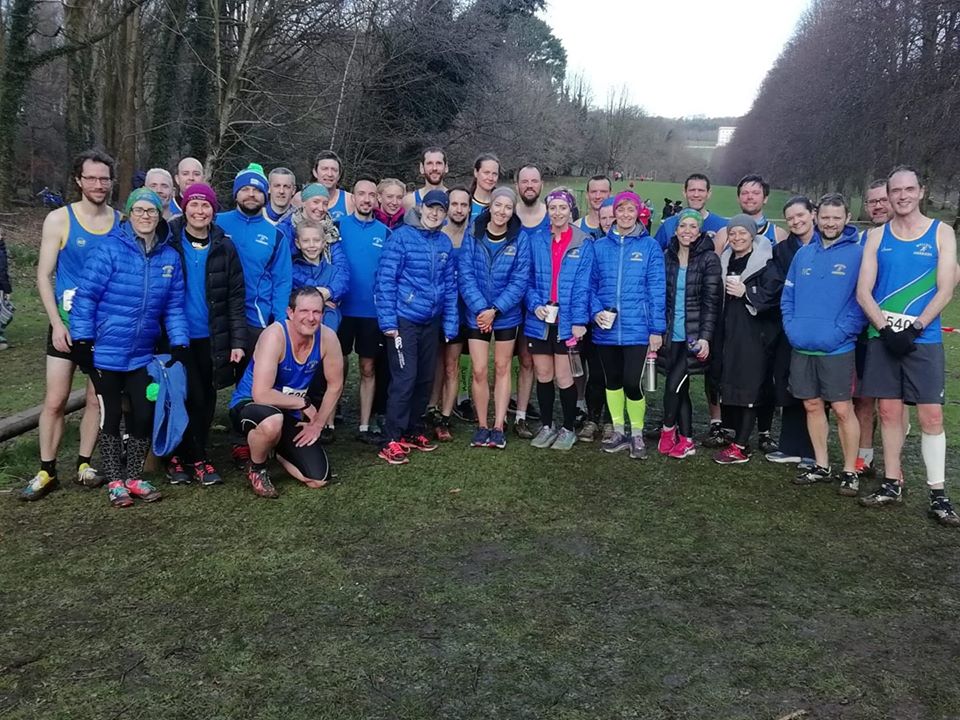 The weather continued to batter us this week, mainly in an attempt to kill the club headers doing the XC at the weekend. But we’re too strong for that. More later.

Tidying up a late result from last week, the globetrotting Donaldsons took part in the Boston Super Sunday 5 miler. In Boston. Danny finished in 32:31 and Tiffany in 48:08

Taking on the remaining parkruns this week were:
Valley parkrun:
Joe Mathers 20:24 (and 3rd place overall), Nuala Muldoon 25:25 (and 2nd female finisher), Nikki Fleck 28:45, Noel Bloomfield 29:05, Philip Fleck 29:22, Marie McFarlane 33:26, Lisa Hamilton 33:27, Fidelma McCoppin 33:48, Sharon Thompson 34:51PB, Deirdre McCann 41:50, Galina Stanevicius 1:01:43
And big congratulations to Nuala Muldoon on completing her 200th parkrun. Nuala has now completed 95 runs at the Valley and rumour has it she is very close to memorising the full course!
How many Harriers have passed the 200 mark? I can only think of one other – he who cannot be fully named (A Dav). Can anyone confirm this?

This week’s tourists are, once again, the Donaldsons as their seemingly unlimited tour of the States continues. This week they were in Florida at the Clermont parkrun. Danny finished 4th in 19:51 and Tiffany in 33:47. The course is along the shores of Lake Minneola, named after a type of citrus fruit don’t you know. Clermont is a site chosen by many elite athletes for training. Tyson Gay, Justin Gatlin and now our own Tiffany have trained here.

Saturday saw the latest XC meet, this time at the picturesque, mostly unoccupied these days, Stormont.
The weather gods were no match for our Mags as the winds dropped and the sun shone down on the mudbath that was most of the course. Everyone complained before and after and everyone loved it. Even Mairead.

Lee did really well, blah, blah but we all know the real battle is for 12th Harrier home. Unfortunately, it was a hollow victory this time for Benny as Lord Ian was taken out early on. Either by his hamstring or a sniper, we’re not yet sure. And then Jim just got unnecessarily involved and it all got messy. Lurgan will be the most anticipated rematch since Rocky got back in the ring with Apollo Creed.

Junior results are not available at the time of writing so I will catch them up next week.

This week’s tune is for the headers. Mud and glory.