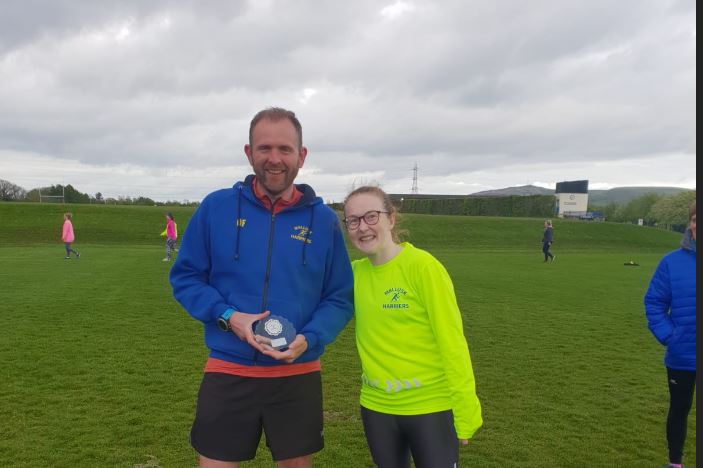 Connemara, London and Belfast marathons have been and gone and let’s hope with the weather forecast for this week that the rain and hailstones are done and dusted too. Like the Runner of the month report there was a few nominations for May that will be carried over to next month.

A number of harriers were nominated for Harrier of the Month for the month of April and rightly so for going that extra mile for the club and its members.

Alan Ladd was nominated for all the time he puts in with the training plans and setting aside time to deal with anyone’s queries. Alan’s Monday night clinics at Bothy, gave support with advice, he is so patient and understanding with us all. Thank you Alan.

Ian Simpson aka Social Boy was mentioned for giving so much time and dedication to MH, with his organisation of social events, providing of tea, coffee and cheer, he’s a more than worthy winner of HOTM.

Janet Grew and Mairead O’Hare got a joint nomination as one member could not choose between these two amazing ladies who both ran London Marathon. Both have shown true spirit – Janet’s determination in running for her Meningitis charity while injured and Mairead’s grit and perseverance through her training and the marathon itself. These ladies could rule the world.

Sarah McCafferty was mentioned for showing dedication and commitment to her training and always being supportive to everyone.

As always there can only be one winner, and this Harrier stood out as no matter what the event, he was there using planes, trains and automobiles to support Harriers at events. This harrier will brave all weather elements and was stuck up a hill for hours, in the freezing cold with nothing but a flask of tea for company (in fairness it was probably to get away from the gurning of Ian Brennan and Joanne Milne).

Harrier of the month for April is Owen Fulton. His support to other Harriers while he is unable to run himself shows what a lovely guy Owen is. He will travel some lengths to support his friends and this is much appreciated by the runners and the other cheerleaders. Some of the comments include:

“Owen is a friendly face in the club and despite his own injury always comes along to races or club events to cheer – he supported at Larne, Connemara and London to name a few”.

“Because of his quiet demeanour Owen’s support and dedication to the cheerleading role often gets overlooked and I think he deserves some recognition for the selfless effort he makes to cheer on the Harriers everywhere and anywhere”.

“Always a great supporter of other runners at the club whether it be a message to wish you luck or out on the course cheering on as he was at Connemara and London. He also does this despite his own injury issues”.

“Owen deserves a HOTM for being such an amazing support to his club mates. Despite himself being injured, there’s hardly a race goes by that Owen doesn’t turn up to cheer, support, take photos and lots more. He stood in the cold, wet freezing rain on top of a hill in Connemara for hours on end – he deserves a medal for that alone, and also supported at London, Larne and in Belfast”.

“Owen has not been able to run this last few months due to injury to most this would put them off getting involved in events. He is always at races cheering everyone on, taking pictures and motivating others. He was at Larne and Connemara encouraging all club members. For me him coming to London to support me just shows what true harrier spirit is and I will forever be thankful for him and the others being there to push me when I didn’t think I couldn’t go on any further”.

“Owen is at just about every Harrier race/event and gives up so much of his time to support club members and I know this is greatly appreciated throughout the club. In addition to this he is also a regular volunteer at parkru.n”

There are lots of opportunities in the next coming months so get involved and support your fellow harriers and you too could be a worthy winner of the Harrier of the Month Trophy. Be good and keep running, until next next month…….