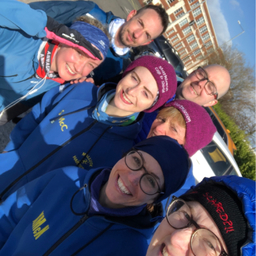 “I love the feeling of the fresh air on my face and the wind blowing through my hair”
So said modern philosopher, and all round deep thinker, Evil Knievel (look him up kids).
But he had a motorbike and didn’t live in Mallusk.
And should he not have been wearing a helmet?
Anyway…

With the Valley parkrun being cancelled, it was good to see everyone heading further afield for their weekly fix. This week’s tourism winner though is Susan Thompson. She headed to Liverpool, finishing Princes parkrun in 27:20. Princes Park was opened in 1842; Liverpool FC were founded in 1892. So at least there was no complaining to be heard for the first 50 years. Within the park is a gravestone, dated 1926, in memory of a donkey called Judy who gave “21 years of service”. Rumours that something similar is being planned for Jamie Carragher are still to be confirmed.

On Friday night, Scrabo Striders held the Mount Stewart Run the Trails Night Edition 10k. This is a race around Mount Stewart, over 10k, at night. Taking part for the Harriers were:
Anton Piatek 58:43, Victoria McCready 1:22:08

And today, Dermot Boyd continued his Born2Run streak finishing the Castlewellan 5k in 33:30.

Just in, Nuala Muldoon completed the Stroke Association Resolution Run in 50:03 and was second female finisher. Well, that’s what she says anyway. But seeing as its her birthday, we’ll believe her. This time.

So, this week’s tune once again about wind and storms. Again.