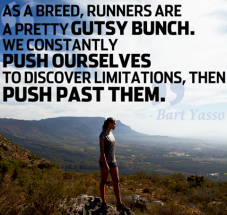 As the week turns, the digits of one hand tell we are close and that Larne is almost upon us. This is a good week for preparation. One of the times that the Benjamin Franklin quote springs to mind, ‘By failing to prepare, you are preparing to fail.’

Those who are familiar to running half marathons generally know their pre-race routine, but any who are treading the 13.1 miles for the first time, being prepared is the first hurdle to overcome.

Race kit, get it ready at the latest the night before, not on race morning and finding it in the dirty linen basket. Breakfast, eat early. Tape up, grease up. If sunshine is forecast, sun block is advised, it may not feel warm, but March UV levels can be high especially if you are going to be exposed for up to two hours or more.

Most importantly, enjoy the day. You’ve trained for it, conquered the Sunday hills, and now it’s time to make Larne rock!

As for this week, another abundance of parkrun PBs were to the fore for our happy Harriers.

Tina Steele led Mallusk on the shores of Lough Neagh in 28:40, Deborah Ewing 29:01, and Elaine Kennedy 52:54 once more helping out as a volunteer to ensure that the parkrun takes place.

Our only maiden city flyer in the north west was Ken Mcauley arriving in for Mallusk in 22:04.

An awesome run by Susan Thompson 22:40 at Falls, saw her breeze in as 2nd lady and 10th position overall.

Robbie Gould 20:40, led the way as effortlessly as the Lagan flows past the park. Fiona Wylie again with another PB in 30:43, Jennifer McCoppin 33:06, with Rosalind Stitt 33:32, her third PB since the New Year. Fidelma McCoppin completed this famous five of Mallusk Harriers in 35:04.

This week our man in the east was Alex Davidson who not only came home sub 20, but with another PB in 18:40.

East Down Athletic Club, hosted this annual 10K race in picturesque Downpatrick, with Danny Donaldson again inspiring all with a time of 39:30. Matthew Cromie was close behind in 39:38. John Rooney 47:06, Tiffany Donaldson 58:50, Lisa White 59:01. Mairead O’Hare limbering up for Larne in 1.18:29.

Another colossal outing at the weekend for this great club, where boundaries are surpassed with utter strength and determination.

(Hopefully everyone has been included)

Have a good week.