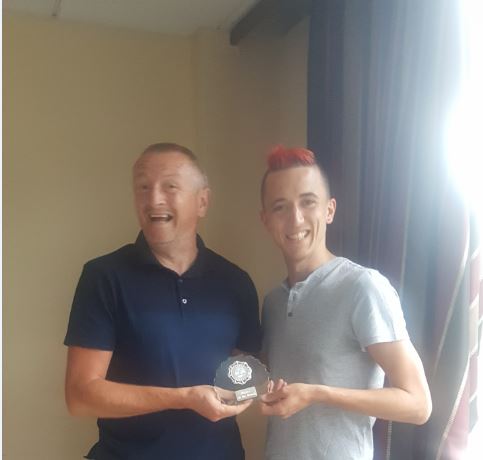 Well done everyone, another great display of Harrier team spirit on show this month, especially during the support of the Coast Road Marathon and Run Newtownabbey C25K programme.

Many Harriers stepped up and went the extra mile for their fellow club (and non-club) members in June, you all deserve a round of applause for your efforts.

On to the nominees for June….

“Has attended every session of C25K. Printed T-Shirts, Printed certificates, Fixed speakers, Stood in for sessions when needed. Organised the safeguarding training. Organised the charity night.”

“Even though Kevin had a long journey recovering from injury he continued his support of the club and its members. His work in promoting the club and his reports on social media is much appreciated and always welcomed. I’m so pleased to see him back running again.”

“What can I say? This man just gets better and better; one marathon after another and what a PB at the Coast Road.  Outstanding example for us all!”

“Despite recent injury setbacks Patricia was in great form in Lisburn and ran me in for my last mile after my legs had decided enough was enough. Always a friendly face and full of positivity.”

“For supporting everyone when they’re under pressure.  For allowing no one to escape a Wed run or Sat Parkrun-no excuse accepted!!”

“Dermot is a real ambassador for the club. He consistently gets the Harrier vest out, even doing all the Born 2 Run series this year, and when he’s not running he’s out supporting with his camera, whether at the Larne half or at the recent Antrim Coast Road marathon, and lots of other races too. He holds all the club records for his age category and is a real gentleman.”

“A friendly face, (though the devil horns are out when creating 10@10s on a Friday afternoon). Lee is not only an ever-improving runner, with amazing PBs in Coast Road Marathon + Lisburn Half this month, but also sets an example to all harriers. His commitment to training sessions, C25K & organising Sunday runs on a weekly basis don’t go unnoticed or unappreciated. A more-than deserving Harrier Of The Month I think!”

“He deserves it for the time and effort he puts in to doing the Sunday 10@10 routes. You can tell he goes out of his way to find the worst hills no I mean find interesting and varied routes!”

Well done to all of you for your nominations 🙂

This month turned out to be a hotly contested HOTM between two of the pillars of Mallusk Harriers.

For another very successful C25K programme:

“Giving up his time to take the C25k programme this year. He continually encourages and motivates people in their training”

“Huge amount of time given to the organisation of C25K programme. He is working hard in the background to ensure this year’s road race will still take place despite new procedures and obstacles facing clubs this year. He is doing all this in addition to his role as coach and a constant source of encouragement to many at the club”

Well done ADav, always very modest, but everyone in the club and all the C25K graduates would like to express their gratitude for the amount of time and dedication you give to putting on such a successful programme and helping every one of them achieve a massive goal in their lives.

On to the Coast Road Marathon, which witnessed a true reflection of the amazing support Mallusk Harriers club members give to our runners on race day.

Indeed, every Harrier running that day was truly indebted to the support given and I’m sure it was a big contribution to so many PBs. As a group you have received a collective nomination for HOTM:

“All of the Harriers supporting at Antrim Coast Marathon.  Massive lift every time we saw a group”

Alas there can only be one winner, and that winner had a big part to play in the above.

He tirelessly cycled back and forth along the route ensuring we all had the supplies we needed and even went as far as to help runners from other clubs who were in need of some extra hydration on such a warm day.

In addition to this, the captains have witnessed first-hand the amount of work, time and dedication he puts in for our club behind the scenes and in particular to the 2 junior sessions held every week.

Our HOTM for June is….. Paul Skillen

“People to not realise the massive amount of work Paul puts in for the club, his dedication to coaching, especially when it comes to the juniors, is a real credit to him.  Everyone doing the coast road marathon was very thankful for his ‘deals on wheels’ in such hot weather and it is for these sorts of selfless acts that he fully deserves to be HOTM”

“For helping everyone at Coast Road, cycling up and down with refreshments but most importantly for cycling by my side (protecting me from crazy drivers!) for 4 miles and pushing me to a PB.”

“Gotta be Mr Paul Skillen – his dedication to the club and its members is second to none. He devotes so much of his time to the club, as head coach particularly, preparing training plans and coaching – but he went above and beyond for the guys at the Coast Road Marathon!

His support was invaluable and he no doubt contributed to the vast number of PBs that were achieved that day.  He is steadfast in nature and as reliable as hell when it comes to being there to support and guide us”

A true reflection of Harrier spirit, congrats Paul and all the nominees for June, very well deserved!