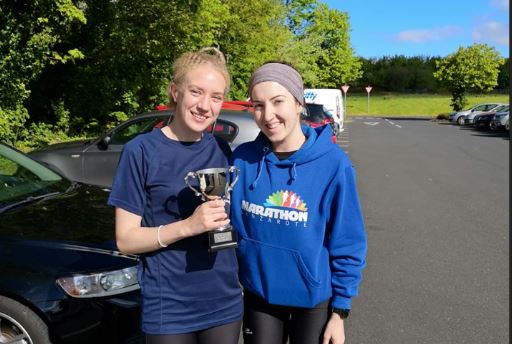 After a long winter it is always great to get into April with the better weather and extended nights. So it was rather disappointing to get pelted with hail stones in our first training session back at the playing fields in a scene that took me back to our XC race in 2018 (nicknamed ‘In the bleak Mallusk winter’).

If the weather didn’t hot up then at least the performances from our runners did. As always there were plenty of different races to choose from with club members taking on new distances and notching up PBs all over the place.

Belfast marathon was held on a new day with a new route but not as some of the club thought on a new month with a few nominations coming through for performances in May. We’ve ‘adjusted’ the results accordingly and you may have to wait slightly ‘longer’ to see your comments come through… Rest assured we’ll save these nominations for May’s ROTM.

April started with Manchester marathon where Kevin Donnelly had a fantastic run smashing his marathon PB by 17 minutes. He backed that up with two 5k PBs and a 5 mile PB:

“Kevin amazed us all with his performance at Manchester marathon. He is flying these days with a big marathon PB in Manchester! Go Kevin!”

Another Harrier setting new PBs left right and centre in April was Anita Piatek. A half marathon PB at Subway was sandwiched (get it…?) by bests for 5 mile and 5k at Ballymena Belles and Springwell’s Purple ladies race:

“Anita has been absolutely smashing out PBs this month from Ballymena Belles to Purple Ladies. She has been very committed to her training + it is more than reflecting in these great results!”

Mairead O’Hare was nominated for a brilliant performance in her first marathon at London this month which followed a 7 minute half marathon PB at Subway:

“What a fantastic performance in the London Marathon. A very determined Mairead embraced the training and did herself and the club proud getting right to the line. Well done Mairead.”

Running a marathon isn’t easy. Running a marathon a few days after being on crutches is definitely not easy. However, Janet Grew did just that and her achievement of finishing was rightly picked out as an inspiration to other club members:

For some at the club, a marathon isn’t long enough anymore. Congratulations to everyone who completed the Connemarathon (39.3 miles); for many it was their first ultra distance.

Lee O’Boyle has obviously been reading too much Scott Jurek. The legendary ultra runner finished second in his first ever ultra… and that’s exactly what Jurek did 25 years ago

🙂. Lee’s tireless work ethic is an inspiration to others at the club:

“His dedication to sport and training is inspiring and his achievement at Connemara ultra was incredible. Couple all that with his unassuming attitude and his willingness to help and encourage others embodies what I love about running. Congratulations Lee.”

We also had two ladies running their first ultra at Connemara. Our ladies’ captain Suzanne Brennan was nominated for her ultra training and race:

Well done to everyone nominated and keep doing what you are doing. However, our winner this month pipping the rest on the list was Sharon Dunn. Sharon has been knocking on the door of ROTM for many months and her ability to maintain her levels of excellence has finally got her the biggest share of the vote this month. Here’s what you all had to say:

“Sharon worked and trained so hard for her first ultra and absolutely smashed it! What I love about Sharon is how modest and humble she is about her achievements. Her attitude towards training and her strength and determination is inspiring. Go girl x”

“I’m nominating Sharon Dunn for her total dedication to training and it was brilliant to see that pay off at Connemara ultra. Well done Sharon!”

“She trained so hard for Connemara and showed great dedication which paid off on race day with a great performance. She continues to go from strength to strength and fully deserves ROTM for April”

Well done Sharon, a very deserved winner. Good luck with your preparation for 24in24!