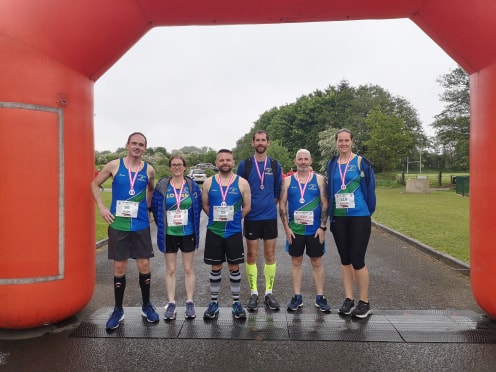 A (not very) wise man once told me “make hay while the iron is hot” and many of you seem to have taken that slightly confused advice this week with Harriers racing all over the place.

Waterworks junior parkrun:
Joseph Eager 9:38, Eloise McAuley 9:58, Leo McAuley 16:03
And a big congratulations to Joseph for completing his 100th junior parkrun, the first Harrier to do so.

On Tuesday night, Kevin Donnelly continued his recent good form with a 18:24PB at the Bob Heffernan 5k in Johnstownbridge, Co Meath (or Kildare, the jury is still out). Amazing that Kevin finished 136th with that time.

On Wednesday, Dermot “Snapper” Boyd began his week of racing with the Maghera 5k, finishing in 31:29.

The RunHer Coastal Races took place on Friday night in North Down with Harriers covering a couple of distances. Clubs are not noted in the official results so apologies if I have missed anyone.

Saturday saw the ever popular Mayfair races held by Co Antrim Harriers who seem to be a cookery club as well as a running club. Once again, they had post-race hospitality good enough to rival our own race spread (almost!).

Earlier today, Mairead O’Hare was at it again (two races a week minimum for this one recently!) at the Ballycastle Runners AC RSMF Marconi Run in (amazingly) Ballycastle, finishing the 4.7 mile course in 54:15 (unofficial).

Couldn’t find official results anywhere but I know Aidy Hughes took part in the run for life 5k at Stormont this morning finishing in 24:20 (unofficial). Elaine Kennedy ran the 10k distance in 1:11:08 (unofficial). No time yet for Emily Dowling but I understand she ran with Elaine.

Ian Simpson dumped the gazebo for once and headed off to Liverpool for the Rock’n’Roll Half marathon. Ian finished in the rain in 3:00:40. Enjoy meeting your Uncle Arthur later sir!

We also had Harriers at the Newry Half Marathon today (told you it was a busy week!).
Prof Alan Ladd finished in 1:25:37 and Angela Stevens in 2:07:44PB. Again, apologies if I missed anyone here.

So this week’s tune is in honour of social boy’s visit to Liverpool, the second best city in England in terms of both music and football (all complaints to the committee please). I know it’s a cover of a Beatles song but it’s just an excuse to remember the Wonder Years as well as a crackin’ tune.