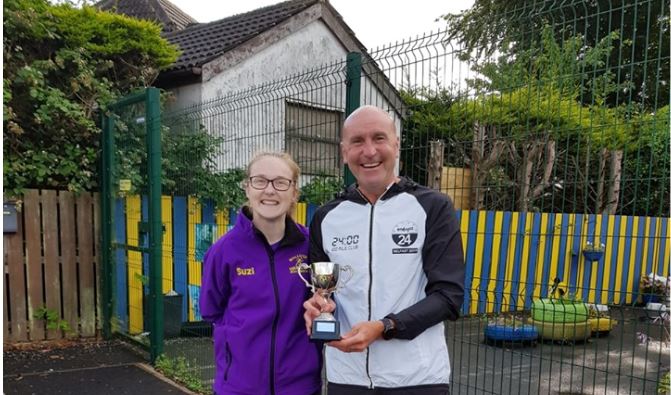 June was a jam packed month in the racing calendar and as always the Harriers were out in force. From EAMS 6hr Challenges, Comber 10k, Energia 24, ultras in the Mournes, marathons along the coast and the best challenge in the calendar, Mallusk Harriers 24 in 24.

Firstly, a massive congratulations to all the 24 in 24 runners. What an achievement and a big thank you to all the support crew and volunteers. 24 in 24 was a huge success and the money is still coming in for the Children’s Hospice.

Now onto the nominees and some of the reasons for their nomination by their club mates….

Gillian Bainbridge was nominated for Energia 24. This girl has been out from injury for the good part of a year, has turned up to every circuits class because she can’t run but recently started back to Tuesday night sessions. During Energia her foot started to hurt pretty painfully to the point were she couldn’t run. Instead of dropping where the team would have just fallen down the leaderboard, she walked and ran when she could and the team finished with 123.3 miles between them. Outstanding Gillian showing amazing determination and team spirit.

Joanne Milne has struggled with injury but was nominated for her outstanding run at EAMS 6 hour challenge and then at Energia. Great spirit and game for anything!

Laura Campbell was nominated for her excellent running at Energia. Laura showed great determination and strength of character on the day and ran amazingly well always remaining upbeat with a smile on her face. So proud of her

Joe Mathers for 24 in 24, The quiet man! Like the other crazies Joe just got on with this mammoth task.

Laura Rose, for 24 in 24, very impressed with her performance and attitude during 24in24. She clocked up an impressive amount of mileage and led most if it from the front, maintaining a great pace.

Lee O’Boyle, where do you start? So dedicated to his training and supporting others. Lee’s achievements this month were outstanding, completing all 24 parkruns and success at the Mourne way ultra. The determination you have Lee is in another league! Amazing performance in the Mourne ultra and 24. Lee is constantly training to the highest level he works hard in everything he does. Winning the ultra was great to see. It was a long time coming. He smashed 24in24.

Neil Campbell was nominated for his leadership in the 24 in 24 event on the day.

Paddy Brooks, with great runs at Lisburn Half Marathon and Comber 10k shows the training he’s putting in is really paying off. He also managed a few 24 in 24 parkruns to support the team which was greatly appreciated.

Peter McGarry was nominated for another marathon record, enough said 😉💪

The winner of Runner of the Month was difficult to track down. Some say he was off in another country hatching another plan with his minions and others say they see him wondering aimlessly around Victoria park counting laps…… Runner of the month for June is Mr EAMS, Craig Mills aka Gru. Craig has recently joined the headers corner of the club with his 101.3miles in just over 22hrs as Energia 24. What an unbelievable achievement and outstanding running. These words speak for themselves “Craig ran over 100 miles”. This outstanding performance at Energia 24 gets my runner of the month vote. What a fantastic effort, there literally are no words……… other than Congratulations. Craig, you absolutely smashed it!