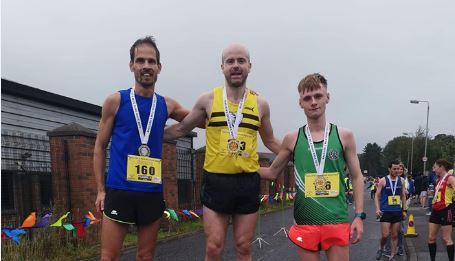 The obvious highlight of the week (or any week) was a certain race over a PB course somewhere in darkest Mallusk. But more of that later.

As for the tourists, family McCready headed to Kilrush in County Clare for the poshly named Vandeleur parkrun. Neil came in second overall in 19:42 with Ryan finishing 28:10. The parkrun is actually named after a prominent land-owning family in the region and is Dutch in origin. Obviously.
But this week’s winner can only be Sarah Ross. She completed her first parkrun at Dunedin in 27:53. Dunedin is on the South Island of New Zealand and its name comes from Dun Eideann, the Scottish Gaelic name for Edinburgh. Jim Robinson from Neighbours is from Dunedin. How good is that!

And ADav (The Reverend Cleophus James) was at the Valley, finishing in 23:50.

There was other racing happening this week. On Wednesday, Angela Stevens, Dermot Boyd and Zoe O’Prey represented the club in the Crawfordsburn 5k Trail Race, Angela finishing in 31:34, Dermot in 33:26 and Zoe in 46:55.

But the main event was Friday night with the latest instalment of our own club race. Almost 350 hardy souls braved the wet and the elevation to qualify for the amazing post-race hospitality.
Mark McKinstry won the men’s race and Shalene McMurray won the ladies race. Wearing the blue and yellow on the night were Peter McGarry 28:23 (and 5th place), Ramunas Stanevicius 32:32, Alastair Houldsworth 34:42, Aidan Hamill 39:18, Galina Stanevicius 50:15, Marie McFarlane 52:39, Marga Regan 52:57.

Its been said before but is still worth repeating. A big thank you to all those volunteers who helped, both on the night and in the run up. The reputation and popularity of the race is all down to your efforts. Put those drinks down for once and pat yourselves on the back. Then carry on.

I’m having to ration decent songs about hills and there are none about pizza. I’ve looked.
So, this week’s tune is for the Valley parkrun team, our hill loving (blues) brothers from another mother.