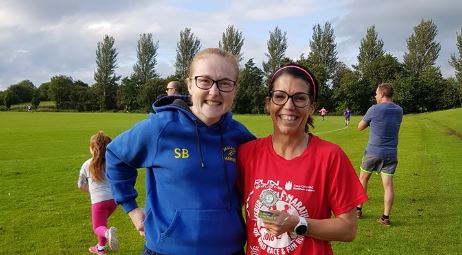 As 24 in 24 came to a close, it left July to prep for the best road race in the land. While some Harriers were in full force with the organisation, others were sitting back and relaxing with a beer or ten in sunny holiday destinations.

Paul Skillen was nominated for his efforts and encouragement at training each and every week. This Sunday our Head Coach is taking on a half Ironman, good luck Paul and all the best!

Mairead O’Hare was mentioned as she is one of the club’s treasures. She is understated in her achievements and her ability. She has progressed so well this year and stopping her race to help a friend in Sea to Sky this month shows her true kind nature and Harrier spirit.

Lee O’Boyle was nominated for his amazing performance in the Denis Rankin Round.

We had one clear winner in July and this lady just bursts with Harrier spirit as no job is ever to big and nothing is ever a bother to her. The winner of Harrier of the month is Karen McKee.

Some of what people had to say about Karen include,

“Karen has organised an incredible goodie bag for the club race as well as putting a lot of work into funding applications to help our juniors and coaches”.

“I’m voting for Karen because of her selfless, endless work for the Club Race and the goodie bags in particular and also her work towards the recent receipt of sponsorship from Lidl.”

“Karen really does so much behind the scenes. Working hard on funding, negotiating with Decathlon for 24 in 24, the goody bag for the road race speaks for itself. Karen you are a star”.

“Her support for the couch to 5k. For her work behind the scenes to make sure we have the best race swag bag ever!”

Karen is a very worthy winner of the Harrier of the Month.

“In recent months Karen’s contribution to Mallusk Harriers has gone way above and beyond what we expect from members. However Karen’s contribution to the club has been even more exceptional given what she has done despite suffering a horrendous couple of months on a personal level. Karen was one of our super 24 in 24 team. She did brilliantly, but was personally very disappointed that she was not able to finish all 24. A few days later while on holiday she received the devastating news that her daddy has passed away. Karen did not allow this to stop her helping with club matters. She got on with helping with a minimum amount of fuss and sought nothing in return”.

“The club has being looking to purchase a podium for a number of years. To date the costs associated in such a purchase have proved prohibitive. Karen volunteered and organised to have the podium made. Karen and her brother Gary purchased all the materials and together they designed and made the podium. Both donated their time and efforts and have refused to take any payment for the podium donating it to us in memory of their dad Frankie. For the club to finally have our own podium and no longer need to borrow from others is fantastic. The podium is a fitting tribute to Karen and Gary’s dad – Frankie Matthews and it received its first outing at our Five Mile Race in early August”.

“Karen has devoted a lot of time and effort into researching and applying for grants on behalf of the members of the club. This has allowed the club to purchase a lot of new equipment including new flags and signage that otherwise we would not be able to afford. Karen continues to work on other grant applications that will benefit us all as members. The club hopes to reveal more details in the months ahead”.

“Karen was solely responsible for organising the fantastic goody bags that were given to all our participants at our recent 5 mile race. We have created a monster in a way with how good the bags have been over the years. But this year bags were without doubt the best yet. We got amazing feedback from all our competitors in relation to them. At many races you are lucky if you get a buff. Our bags had a buff, the bag itself, a box (not a sample) of cereal, protein milk, Capri Sun, Chocolate Bars, Pens, Pencils, Stress Balls, Key rings, first aid kits and lots more. The value of the bag and it’s items more the race entry. The time and effort put in by Karen was simply amazing and greatly appreciated”.

“Karen is an amazing asset for the club. She volunteers at all our events. She is normally one of the first hands up to help. She assists with enthusiasm and vigour and seeks nothing in return. She is a complete credit to her family and this club”.

Congratulations Karen you the true meaning of Harrier Spirit