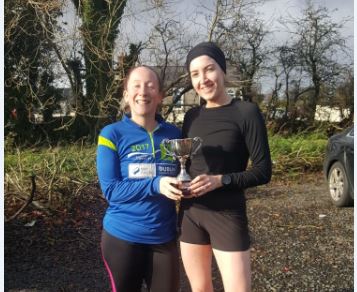 We are now definitely into Autumn harriers and Christmas is approaching, with XC starting and the dust settles on Dublin Marathon the nominations came flowing in for Runner of the Month for October.

First up, Kevin Donnelly was nominated for returning after a long lay off due to injury, Kevin’s hard work and determination got him back to his best this year. Putting in some quality training mileage recently has paid dividends, especially during October, with a great run at Orangegrove, Run Anon Lough View 10k the following day and of course, an amazing run at Dublin Marathon.  Kevin is always so modest about his achievements and deserves recognition for all his hard work.

Alan Ladd was also nominated for his progress over the past few months has been extraordinary, culminating with an incredible sub 3 hour marathon in Dublin. He has worked so hard to get to this level, and on top of all the work he does as a coach, developing and encouraging others to reach their goals.  October is a difficult month to pick just one but my vote goes to Alan for his sheer dedication to training and focus on smashing all his goals this year.

Lee O’Boyle was also mentioned for doing a Marathon and XC in one day, he’s a machine!  Thought good preparation for a holiday was to run his 1st sub 3 hour marathon in the morning followed by a cross country race in afternoon.

Mairead O’Hare was nominated for being the best runner.

Clare Teer  has struggled from she first started the club 3yrs ago with her breathing, now with the correct medical advise and support from the coaches she really has taken off (literally) she is getting stronger, faster, improving her 5k and 10k times every week. She is so focused and determined to do well.

Roseanne McGeown was also nominated for training so hard this year and accomplished her first marathon. Roseanne you are a superstar.

Neil Campbell was given an nomination for being the strongest runner ever, superstar.

Leeanne Skillen was also mentioned for having an amazing run at Dublin with a fantastic PB. She has trained hard through injury.

Tiffany Donaldson was nominated for running a 22 minute PB in Dublin (5th marathon of the year!) but also running all the team events in October (Orangegrove + 2XCs). The only other person who did similar was Lee and you can’t give it to him again! Tiff has won before but deserves it again for hard work and being a great team player.

There can only be one winner of the prestigious Runner of the Month Trophy and October’s winner had an amazing total of 13 nominations, this month the trophy goes to Laura Rose.

–  I’m not biased but my sisters attitude dedication and commitment to her training is what this club is all about.  She has put the hours of training in and her times are so well deserved and show what can be achieved.

–  She really is an asset to the club and shows any member who doubts their ability that it is possible.  I am so proud of her and really feel she deserves this award this month due to her recent success in the Dublin Marathon with an amazing time of 3.26 and her podium position in the Decathlon 10k taking 2nd female in sub 44.  She truly is an inspiration.

–  For her amazing times at different events lately well done Laura. Laura’s dedication to running is second to none.  Throughout her Dublin training she stuck to her plan and produced some PBs, but her finishing time at Dublin was an outstanding PB and she even managed another PB at the Valley less than a week later.

–  Laura has excelled in all aspects of training this year.  She showed serious commitment to a massively challenging marathon plan in prep for Dublin which led to her achieving another amazing PB.  The PBs seem to be endless for Laura at the minute with the recent Decathlon 10K podium finish + parkrun PBs almost weekly, really outstanding and for me, an easy choice for ROTM.

–  Amazing results across various distances, 2nd female finisher at parkrun and decathlon, PB at decathlon 10k and an unbelievable time at Dublin. And always smiling!  Commitment to training and a number of PB’s as a result of this!  Laura did her first marathon in 2017 in a super time of 4:19. However she managed to finish Dublin this month in a brilliant 3:26 minutes. This qualifies her for good for age for two of the US major marathons  Boston and Chicago.  Laura has done this by her dedication, drive and focus to all elements of her preparation including diet and training.  From a coaching perspective she has addressed her weaknesses and concentrated on developing the areas that she really does not enjoy. She asks for advice and heeds it. She listens to the coaches (moans a bit) but ultimately puts what she is told into practice.  Laura has also keenly represented the Club at this years Ulster Relay Championship at Victoria Park and Cross Country at Comber 24:53 minutes.

–  Laura has become an inspiration to many at the club and has shown what can be achieved with hard work and determination.  She is happy to provide assistance and advice to newer members of the club.

–  Laura has set yet another shining example of just what you can achieve when you apply yourself and commit to your training. Her PB at Dublin marathon was a testament to this. Laura has worked extremely hard to achieve this PB, and most importantly always taking time out to support and motivate others along the way as they train towards their goals  Hard work, training and dedication which really paid off with an amazing run at Dublin marathon.  Even after Dublin, she continued with a PB at parkrun and 2nd Lady at decathlon.

– Laura totally deserves it this month also for stepping up in XC even though she wasn’t keen and totally out of her comfort zone.  Inspiring achievement in Dublin marathon and Decathlon 10k.  Laura has applied herself in a gracious fashion and adhered to her training with great respect to the coaches that laid out her training plan. Also Laura had to work at the training sessions mainly by herself and therefore dug deep to achieve her goals.

–  Laura is an absolute shining star in the club. She has gone from strength to strength over recent months and has diligently followed the training plan to the letter and has achieved amazing results. Her hard work and determination are a credit to her. She is also a dedicated member of the committee and a supportive member of the coaching team.

–  I’m very impressed with Laura’s commitment to her challenging training plan over the last 16 weeks.  This has paid dividends and she has come out the other side as a much stronger runner and the PBs and podiums are starting to appear frequently.  Fantastic run at Dublin marathon and I admire her participation in the XC events.

Congratulations to Laura, and its good to see so many of the individual comments left for Laura and all the nominees.

Thank you to all who nominated for Runner of the Month as the Clun Captains can see the numbers increasing each month.