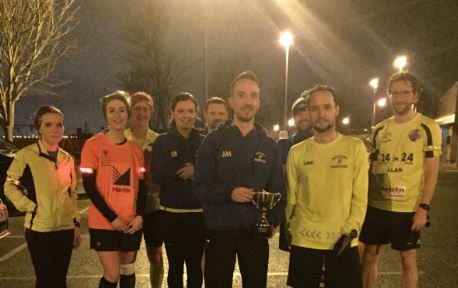 Suzanne Brennan was nominated for rounding up and leading the ladies XC team in to battle in the Athletics NI XC league.

Club newcomer Ramunas Stanevicius received several nominations for some excellent PBs, race performances and team XC participation. Definitely a Harrier to watch out for in the future!

Similarly, Kevin Donnelly and Lee O’Boyle received nominations for superb PBs in the Seeley Cup, strong XC results and a sprinkling of podiums for the club.

But there can only be one winner and in my opinion this one is long overdue!

Sometimes these performances go under the radar due to his modesty, but it has finally caught up with him this month and has not gone unnoticed by many voting Harriers.

December saw him finish off a great year in style with a blistering PB in the Seeley Cup and some brilliant runs in XC events, helping the men’s team to score some valuable league bonus points.

ROTM is… the one… the only… Joe Mathers!