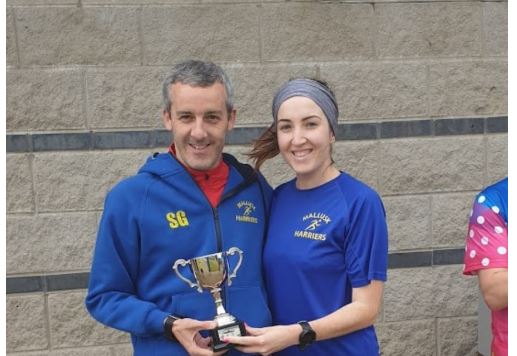 May was Belfast Marathon month and no surprise that the nominations for ROTM are dominated by those who were taking part.
We now know that those marathoners were actually ultra-marathoners by 500m or so, however our first nomination for May goes to a duo who took on an Ultra of all other proportions.
Tiffany and Danny Donaldson
“This is a joint nomination for these two amazing crazies who take on distances and terrains that would make a hardy sailor cry. Their adventure at the Cateran 55 mile ultra was an incredible achievement. An absolutely inspiring pair.”
Clare Teer, Louise Ladd, Lisa Kerr, Karen McKee, Pamela McCafferty and Dave Gibson all received nominees for their efforts in Belfast Marathon.
Clare, “for her preparation leading up to the Belfast City Marathon, her first Marathon, she managed to overcome lots of challenges along her journey.”
Louise and Lisa, “often go under the radar because they had to do a lot of their long runs on their own but they both followed their plans and ran a great first marathon in Belfast.”
Pamela, “showing dedication and commitment along with her daughter when training for her first marathon.”
As runners, we are all too aware that injury can be looming just around the corner.
Angela Stevens was out for a long time due to injury, but through patience, persistence and determination she has shown us this month that injury makes the comeback all the sweeter
“Angela has made a fantastic return after her horrendous injury at Sea to Sky last Summer with PBs at Valley and Waterworks parkruns and at the Newry Half Marathon. She’s ever supportive and aces all her races. Great to have you back Angela.”
“Great to see Angela back to her best after a long spell on the sideline – some great recent performances at parkrun and the Pure Running Half Marathon series”
However, there was a clear winner this month and fully deserved considering how he blasted around his first marathon in an incredible time, hardly breaking in to a sweat, lots of potential to come in the future and a great discipline in sticking religiously to his training plan….
ROTM for May is: Stephen Gallagher
“Smashing his first marathon with an unbelievable time”
“Stephen worked very hard and executed his marathon plan to perfection. A superb time for a first marathon, some great things to come!”
“Absolutely smashed Belfast. His training and progress has been great to watch. He has gone from strength to strength. Well done Stephen!”
Congratulations to all the nominees and thank you to everyone who voted!