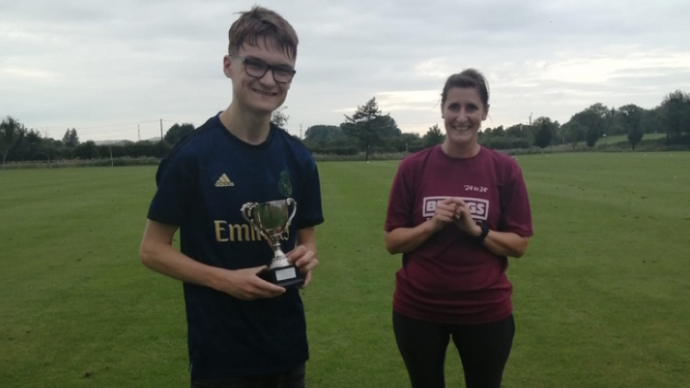 An epic tussle unfolded as some fantastic achievements last month earned deserved recognition. Harriers voted in their numbers for those who either shone at training, raced faster, or completed one of the ultimate tests of endurance.

Here are the Runner of the Month nominees for July:

Dawn Blain drew praise for how her hard work and consistency has been paying off.
“She has been improving every week.”

Alex Davidson was again in the reckoning for the coveted cup based on his speedy showings every Saturday morning.
“Pains me to say it, but his many parkrun PBs and overall training make him a worthy candidate. But please never tell him I said that.”
“Consistently beating and improving his 5k times at parkruns. Great efforts!”
“Alex has quietly got himself back into PB shape with some stunning 5k efforts. In the process he’s shown there’s hope for the more “seasoned” runners still chasing times!”

And then there were two…

As the votes piled in, a pair of Harriers could barely be separated.

David Esler earned lavish praise and deserves an extra-special mention for the incredible accomplishment of becoming an Ironman at the Celtic Warrior triathlon event.
“Consistently hard training and smashing his Ironman.”
“One word – Ironman.”
“For his outstanding versatility in train