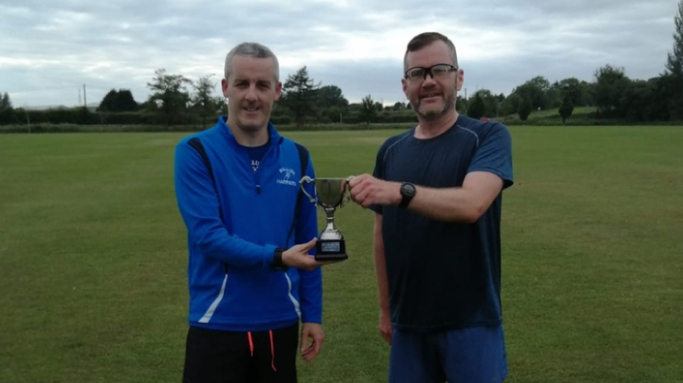 Galvanised by the return of parkrun and increasing races, Harriers stepped up to the mark in June with some sparkling runs and gritty performances. A flurry of PBs, hiking in the mountains and a battle back from injury woes all caught the eye.
So without further ado, here are the Runner of the Month nominees and what you had to say about them:

The indomitable Janet Grew drew praise for her steely spirit and refusal to remain on the sidelines.
“Janet’s a perfect example of never giving up after injury after injury… good to see Janet back at training and doing races… one of my heroes.”

Patricia Curistan also impressed by completing the Mourne Seven Sevens, a test of endurance and mountain skills which this resilient Harrier met head-on.
“For her efforts round the Mournes for charity. Awesome achievement.”

Moving on, speed obviously runs in the Davidson family genes. Our chairman, Alex Davidson, proved his regular exhortation that ‘winter miles equals summer smiles’ by getting into PB-shape at the Valley.
“It was fantastic to be back at parkrun in June, and one of the results that really stood out on the first weekend was Alex. He’s obviously worked really hard through lockdown, and great to see him in terrific shape and running fast times again.”

Not to be outdone, Ben Davidson smashed his own PB with a spectacular 19:47 run at the Valley parkrun.
“Ben has been training really well on Tuesdays and it paid off with a first ever sub-20 5k. Also special mention for Tom Fleming with a brilliant 18:35 at the Valley.”

Brilliant running and well done to everyone for the hard-earned nominations. However, top billing will come as no surprise given the stellar form this Harrier has shown on both road and trail.

Runner of the Month for June is: Kevin Donnelly.
“Kevin is the most humble and unassuming man who seems to just get faster and faster. He has had amazing performances this month, including a PB at the Coast Road 10k.”

“Kevin’s had a brilliant all-round month of training and racing. He followed up a fantastic 10k PB at Down Royal with an impressive showing at the Cairncastle Fell Race.”